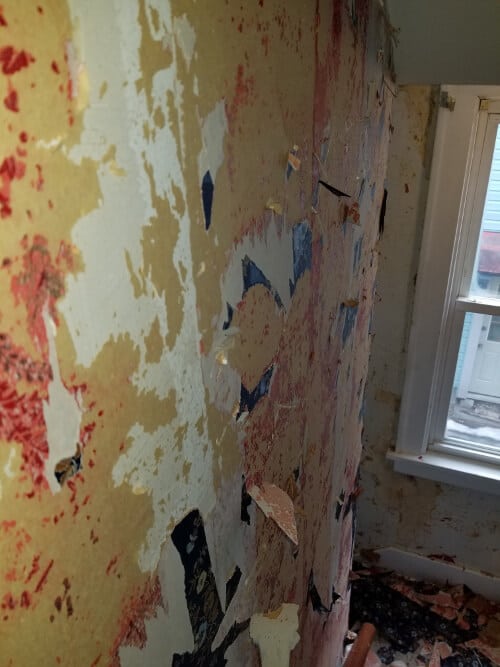 Removing wallpaper is not something anyone looks forward to. Instead, people always think to themselves that there has to be an easier way than to remove that dated wallpaper and a more cost-effective way than hiring a professional to do it. Instead of removing the wallpaper completely, you should be able t paint right over it, right? True, but is it really the best way to go about it, and does it actually work? Here is one example of why you shouldn’t paint over existing wallpaper. At least not without taking the approach.

We completed another job where we had to remove some wallpaper in Albany NY.

This was one of the more challenging projects for several reasons.

The existing wallpaper had 3 layers of different wallpaper.

We originally only expected 2 layers.

Once we soaked the top layer of wallpaper with hot water and DIF.

DIF is a solution you mix with water and it helps to break up the glue.

You can find DIF at any Home Depot, Walmart, or Lowes.

Just mix it with warm water and soak your wallpaper.

We were able to peel it off and expose the second layer which was a red paper that had some white horse print on it.

For some reason it made me think of Christmas cookies.

After soaking the second layer we were surprised to find another layer of wallpaper that seemed to have been painted with a primer and also had joint compound patches.

That in itself already raised some red flags.

Should I Install Wallpaper Over Plaster?

Eventually, we managed to remove the final layer of wallpaper.

The house was 50 years or older and the walls were Plaster not drywall.

Whenever you remove wallpaper from plaster you have to be extra careful.

We tell our customers during our initial meeting that we don’t know what might be underneath the wallpaper as far as damages.

You should always expect the best but prepare for the worst-case scenario.

When we discovered the patches on the wallpaper we kind of knew what to expect.

And sure enough, after removing the final layer of wallpaper we discovered that the plaster walls were in bad shape.

Besides stress cracks, there were numerous areas that have started to break loose.

We instantly felt the cold air come through those cracks and damaged areas.

That is why we never recommend installing wallpaper on plaster walls.

You will not notice what damages your walls have until it’s too late in some cases.

Your home will move over time and stress cracks will form regardless.

But you will not have any damage control if the walls are covered with wallpaper.

Should I Paint Over Wallpaper?

Another option that we try to avoid is painting over wallpaper.

There are just too many things that can go wrong with that method.

The paint can soften your wallpaper and cause it to bubble up or peel.

Also, whenever you paint over wallpaper you will have seams from where the wallpaper meets.

The seams will be visible no matter how many coats of paint you slap on top.

You could skim coat the seems and cover them up.

But you risk them bubbling up due to the moisture in the joint compound.

To avoid that from happening you will have to prime your walls with an oil-based primer like BIN or Zinsser Coverstain but it is not an easy product to work with and has a very strong odor.

That’s why it should only be applied to wear a respirator that is meant for fumes, not dust.

A better option is Zinsser Gardz.

It seals problem surfaces and locks the wallpaper down and keeps it from peeling off.

Watch this short video to see how Zinnser Gardz works on problem surfaces.

To sum it all up, you want to be mindful that if you have wallpaper on plaster walls, there are chances that you have damaged areas without knowing. You should consider removing it instead of painting over wallpaper. 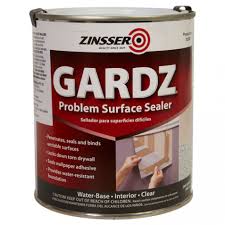 4 thoughts on “ALWAYS Remove Wallpaper and NEVER Paint over it!”